This is by far THE most popular crafter’s glue out there- it’s used in almost all the DIY jewellery tutorials! I’ve always had difficulty finding a glue that works well with metal on metal so I decided to give this one a try.

Warning label: contains a substance that can cause cancer (??!!) and has harmful vapour??? Hmmm not so crazy about it now! But let’s see if it works first- I’m willing to turn a blind eye to a lot of things for a good glue!

So I was at a tannery which supplies skins to Hermes to make their Birkins (!!) and saw a couple of their own-brand (House label?!) products. They were pretty reasonably priced and thought I’d be doing myself a disservice if I didn’t get at least 1 thing! (I’m totally anti-fur but weirdly enough I don’t seem to have an issue with snakeskin… maybe because there seem to be so many of them?? Doesn’t hurt that I don’t feel like cuddling them either :P) The only downside was that the products were pretty errrrr “classic” (euphemism for old-fashioned/ embarrassing to carry out!)

What do you think? Would you carry it??

Anyway I wanted to liven things up a bit, and I’ve been totally digging the punk/rock- chic look so I thought I’d try adding some studs.

(What you need: E6000 glue, metal studs, old wallet It pretty much takes 5 minutes to complete- you just dab some glue onto the base of the spike then stick it wherever you want on your wallet. I chose to a half-border.)

Nice? I was quite pleased with the finished product- wouldn’t mind being seen with it

Definitely not for metal on snakeskin projects!!!! But I will give it the benefit of the doubt for other materials- reviews coming soon! Happy Sunday everyone!

One of the biggest challenges of any craft project is finding the right materials. Now that time’s so scarce, the mot du jour (word of the day) is “hack” and a great craft hack is using glue. But which glue???

I’ve personally always been iffy about glue projects because they don’t tend to last very long & I don’t see the point in spending all that time making something only to have it fall apart a short time later! (This is ‘specially true of gluing metal pieces.) However, there are just too many projects that I wanna make which need glue so I’ve decided that my 2014 project will be to review all the glues out there and find one that actually works!

The 1st thing I needed glue for was a rhinestone bracelet, which involved gluing the rhinestones onto fabric/ ribbons/ cords, so I headed down to the local haberdashery and picked up Hemline’s Gemstone Glue. 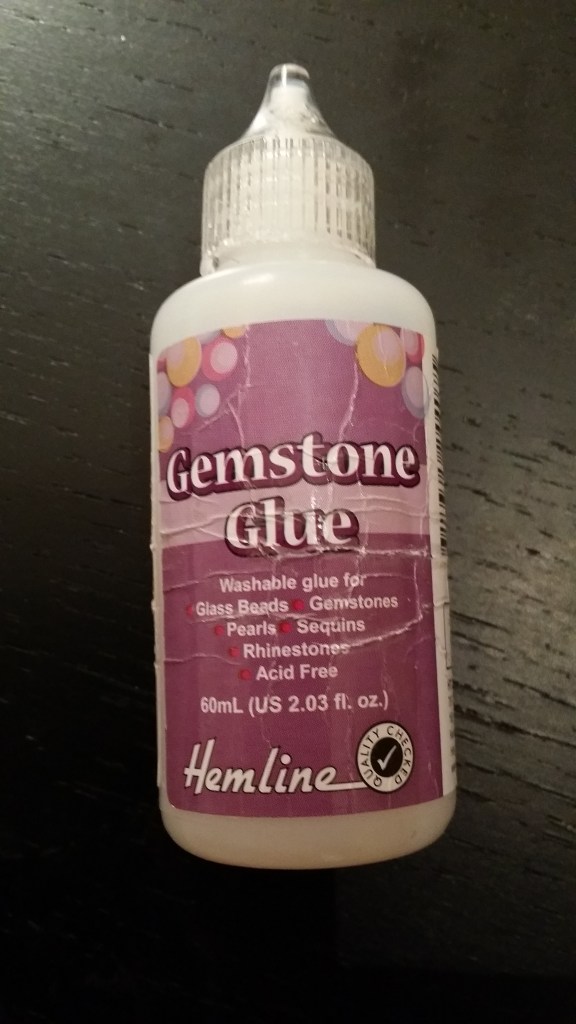 his is what it promises:

“Washable glue for Glass Beads, Gemstones, Pearls, Sequins, Rhinestones, Acid Free. Holds gemstones permanently through repeated washings. (Didn’t even last till the 1st wash!) Won’t cloud gemstones. (true only if you don’t get the glue on the stone which, fair enough, you probably shouldn’t! Note: it does dry clear though) Gemstones are available in different qualities so the bond may vary depend on the gemstone backing (sorry to be anal- but that’s not even grammatically correct  And seems like a cop-out! Because if I say the stone didn’t stick, they can just go “Well it’s because of the gemstone you used!”.”

As you may have gathered from my scathing comments above, this glue didn’t really work out for me. The 1st time I tried to use it, the glue couldn’t even squeeze out of the nozzle! I tried “cleaning” the nozzle by sticking a pin it, cutting it, etc etc but nothing worked. Finally, in desperation I removed the nozzle and SCOOPED the glue out directly!!! (SOOO not a good start)- you can see the lines in the label from me trying to squish the glue out!

Happily, after a lot more poking, I finally managed to use the glue normally (through the nozzle) but even then it was ridiculous- after each use (measured in SECONDS), the glue would dry up or something and I would have to clean the nozzle to use it! (I wonder if there are just dried bits of glue in the bottle which clog up the nozzle from time to time…)

Now that we’ve covered just getting the glue out (can’t believe that needed 2 paragraphs- surely usability should be a basic feature of any glue??), let’s move on to long-lastingness/ washability. Well, I never even got to washability because the rhinestones didn’t even stay on unwashed! About a week after, the rhinestone had pretty much become separated from the felt despite the fact that I didn’t apply pressure (as per the instructions) and used quite a bit of glue. So after that, washability was a moot point! You can see how the centre rhinestone fell out:

Who would I recommend this glue to? No one! The Korean glue I used was MUCH better- will dig up the name and review it next! Also want to review E6000 as I see a lot of the other DIY tutorials use that

All About Dietary Supplements

The Benefits Of Buying Medicine Online